The flight from Sarajevo to Athens on 6 November was terrible to say the least. I flew business class for the first time ever and Beau was placed in economy by our travel insurance. It was a dismal experience. The business class seats were standard, food was poor and the baggage/desk staff in Sarajevo were the total pits to say the least. They had no regard for our bicycle boxes at all. They wanted me to lift the bike boxes onto the conveyor belt whilst Beau was busy sorting out another bag for us. We also had to pay extra for baggage even though we had pre-organized our bicycles to be transported by the airline. Hence, I don’t recommend Austrian Airlines and have no idea what the extra money actually gets you in this case. Particularly noting the ridiculous fee that is charged for business class. I usually fly with budget airlines which are perfect compared to my experience with Austrian Airlines. 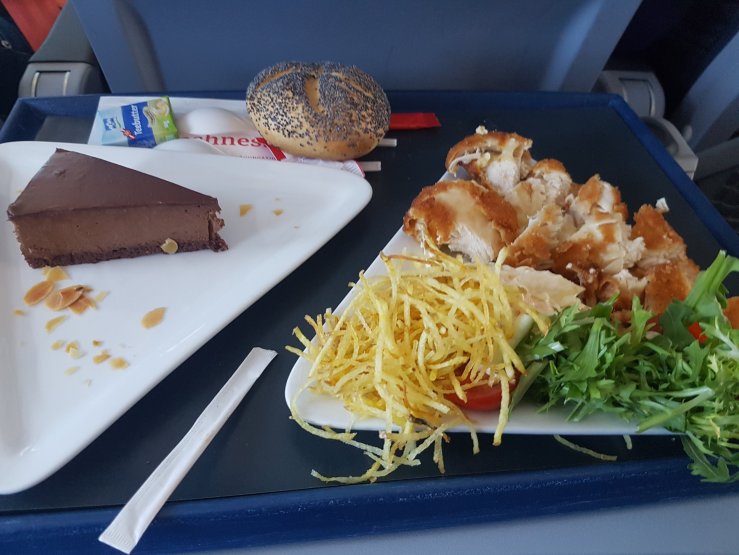 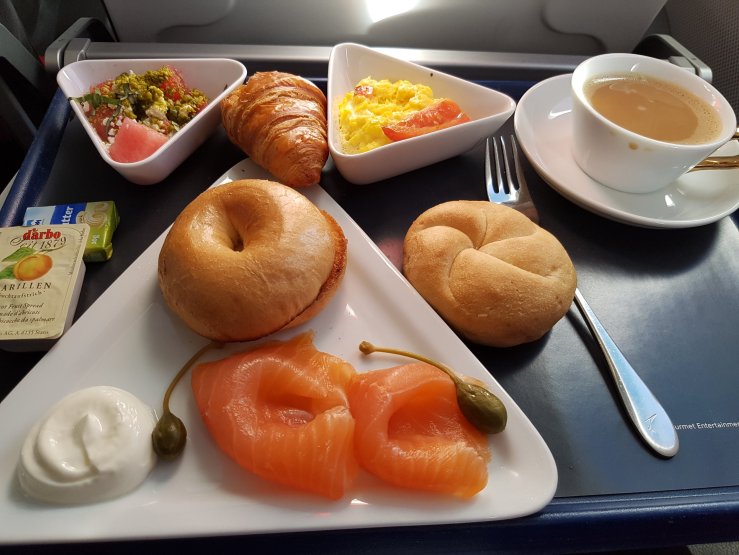 The next hurdle was arrival at Athens airport. Our bikes came out of the standard baggage chute. Something was jamming the conveyor belt. Yep, that would be my bike, oh crap. Apparently Austrian Airlines do not bother with placing the bikes in the oversized section either. Luckily it was just some box damage in the end and our belongings were ok. Anyhow, the moral of the story – Austrian Airlines sucked from start to finish (just my personal opinion).

Yet another hurdle. The taxi. There are no taxis that fit bike boxes in all of Athens. Again, oh crap. We ended up in a luxury van for 100 euro. Ouch!! Luckily travel insurance should cover these unexpected costs. We hated handing over the money but turns out 1 small cab is a flat rate of 34 euro as a minimum, so apparently we didn’t do so badly after all.

Then everything changed for the better. We met the BEST power couple ever – Alexios and Seçil. We could not have stumbled across a more generous, caring and hospitable couple than this pair. This Warmshowers.org couple are the owners of the legendary bicycle touring shop in Istanbul – Biskiklet Gezgini. No wonder it was a successful business with genuine people like this running it.

Our stay with Alex, Seçil and Gabriella was just wonderful. I felt entirely able to rest and recover and see Athens and beyond with them. We had food adventures and a lot of fun seeing the sites and sounds of Greece. We even all went to a Greek Island together and sometimes I even forgot I had a sling on due to being around these guys!! 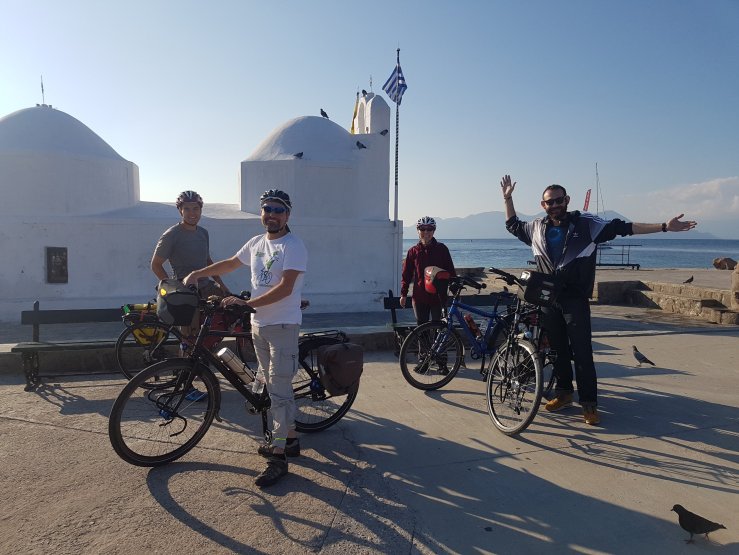 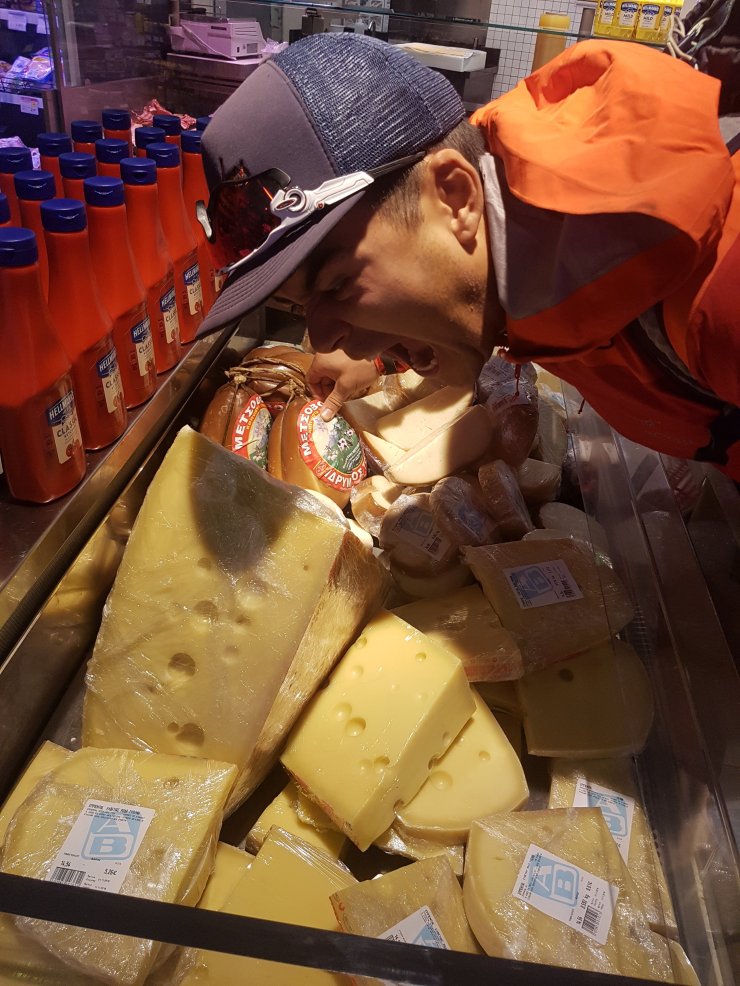 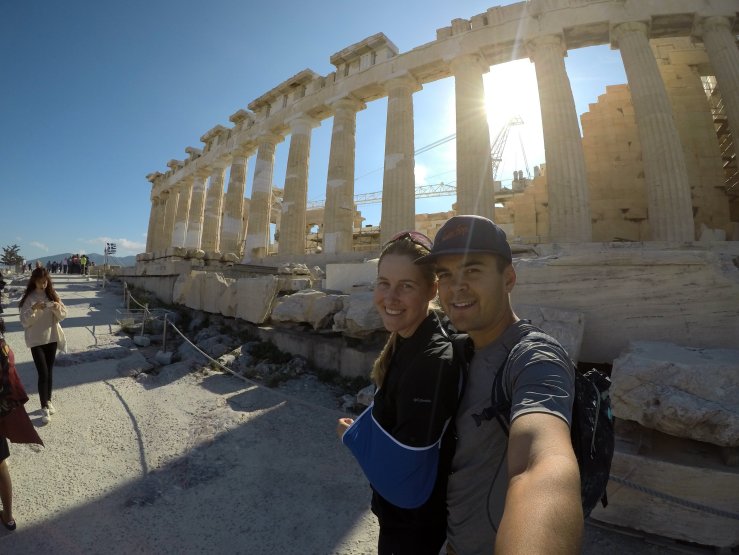 I had another X-ray at 2 weeks post injury – I am still broken and slinging along for a couple more weeks until my next check up at the end of the month.

Beau is continuing to cycle some of our journey and I will meet him along the way – sadly no bicycle for me. 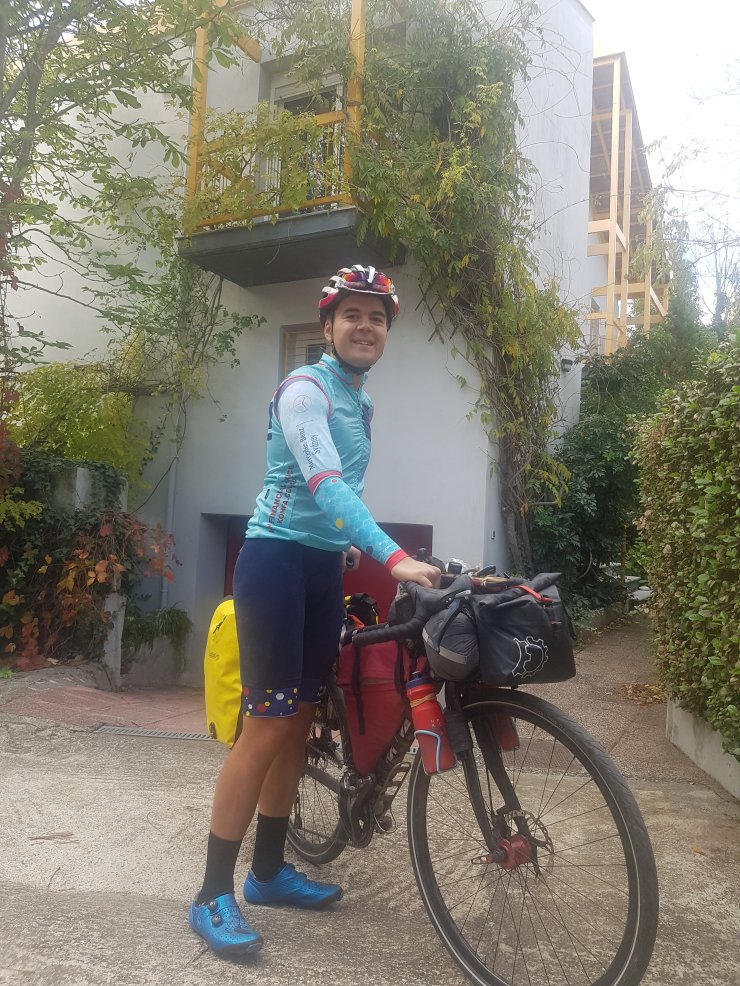 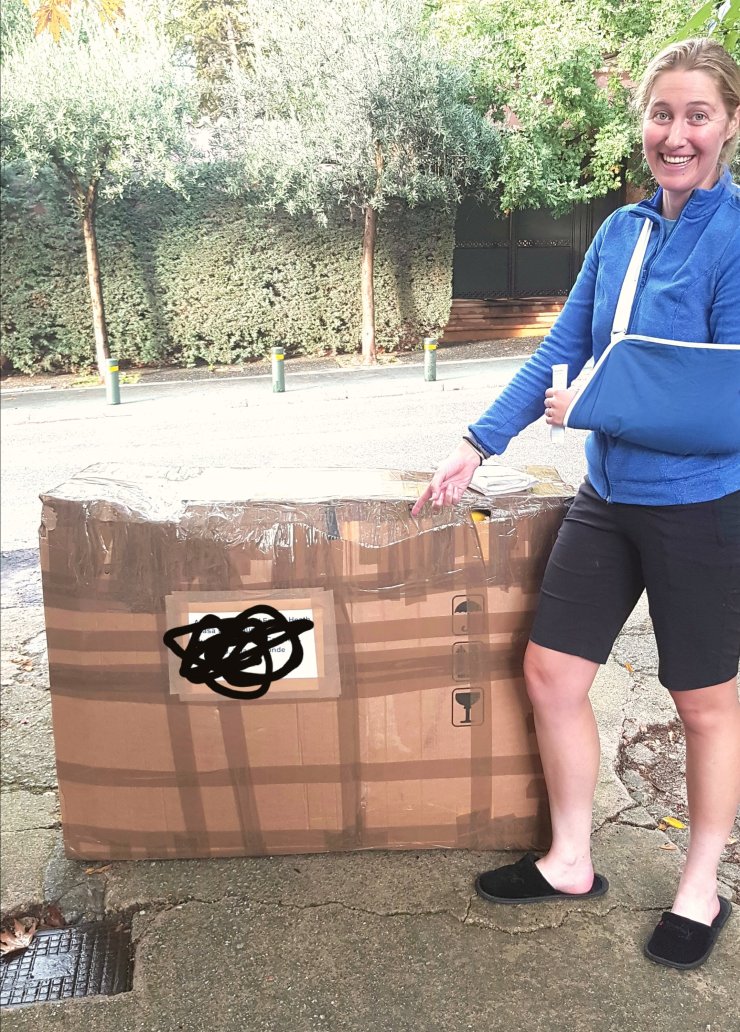 He can provide an update later as he is too busy grinding kilometres to be able to meet with me. I stayed with the family for another week and was treated as one of them – talk about taking in a stranger!! I feel a total part of this family and I will never forget my time with them- so blessed. I get the feeling we will see this pair again though. I really hope one day they come to Australia so I can look after them and show them Aussie land.

Peace out Greece. Despite slinging about – it was rad! So happy to be over here travelling still!
Love to Alexios, Seçil and Gabriella always xox

See you in Sicily! Woot!

So it’s finally back to blog action. I know you the readers have dearly missed the construction of sentences I produce that can only be considered art 😜. Anyways in a change of pace I’m going to give you brief rundowns of my parts of the trip separate to Emm now that we are effectively bunny hopping each other on our way towards Portugal.
So it was on sad terms I departed Alexis’s and Secils place in Athens as I set out solo towards the Greek port where I would ultimately make my transfer to Italy. As the ride out of Athens was a guaranteed nightmare I decided to catch the train to the outer city limits and commenced my ride. It felt like turning squares after so long out of the saddle but eventually I found a rythm and pushed over to the easy coast of the Peloponnese peninsular

I sought 2x giros for dinner then refuge in the back of a Greek Orthodox Church under a big veranda. I thought I had it sweet being out of sight and out of mind and was soon fast asleep. I was woken from my death like slumber by a flashlight from some local police 👮‍♀️ who were keen to know where I had come from and where I was going at 3am!!! Luckily I passed whatever test they had in mind and they told me to just go back to sleep but let’s just say the first night out was not a peaceful affair.
The next 2 days passed in a similar fashion with me riding from sunup till down down consuming numerous oranges along the way as they are currently coming into season. On the second day I went via the ancient city of Sparta

On the third I clipped some pretty big no.s in the transport division both in distance and elevation. I was cooked.
I woke on the fourth day and wanted to make Patras before 5pm but when it started pouring rain from the outset I knew I had a difficult task ahead.

I decided to skip Olympia due to the inclement weather (one for next time) and just literally pedalled the next 6-7 hours until I reached the port town. It was cold dreary and overall one of my top terrible rides. I did make it and rewarded myself with another 2x giros (the standard) before heading on board.

The ferry was an overnighter and cost £50 for a basic deck seat but I was stoked to find a shower and the deck seats available meant I could literally sleep on bench like seats – pretty much luxury when you are bike touring 👌. Overall, I can really recommend the riding in the Peloponnese peninsula of Greece. The roads are in excellent condition and are quite and there is plenty of amazing ruins littered along the way. 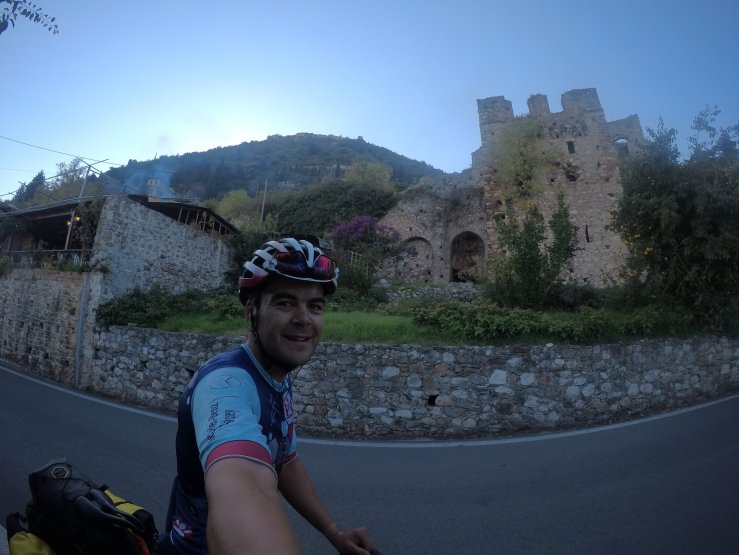 Only negatives are the stray dogs (which consider it their personal duty to try and run down every single cyclist), the weather which can be inclement and horribly cold, and of course not having my trusty sidekick Emm tailing my wheel. I found touring by myself to a lonesome and definitely much less enjoyable affair. Throughout the whole ride I was looking forward to making Italy as I knew it wouldn’t be that much longer till Emm and me were travelling together again 🙏. 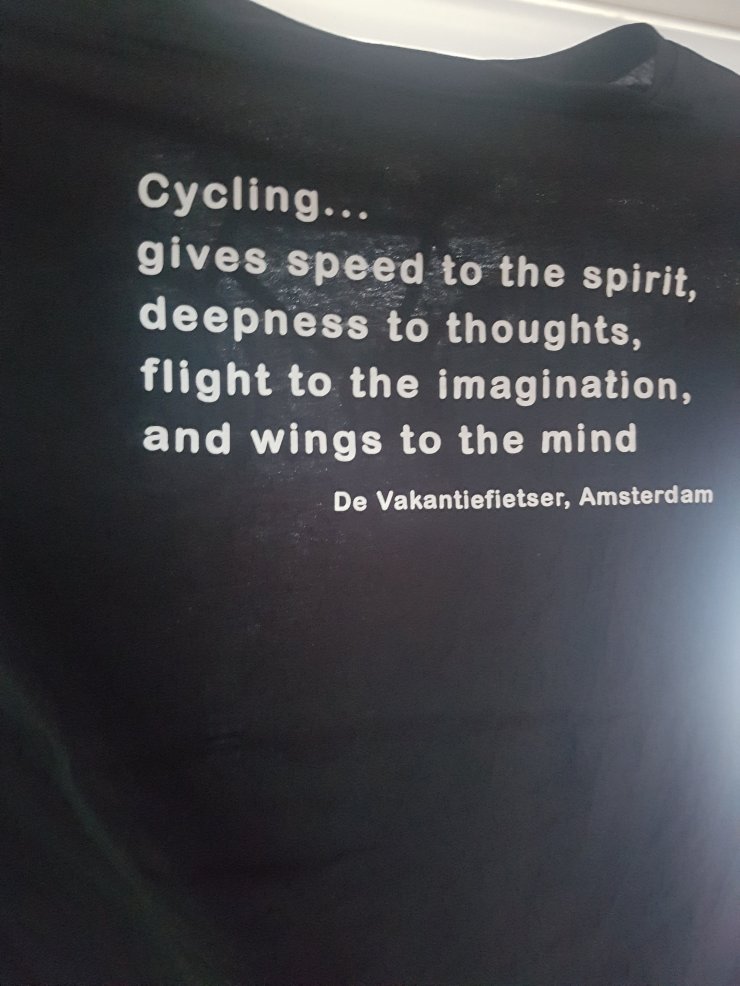