B: Naples to Rome Italy E: Naples Italy then the Camino De Santiago, Spain (see the next seperate post

B: Around 420km of riding for this part of trip.

Day 1: The ferry from Palermo arrived as per schedule….5 hours late 👏. Emm got pretty bad sea sickness so was most relieved to finally dock
in Naples. I guess it’s worth nothing if you have an important schedule then don’t rely on Italian public transport. Lucky for us we don’t. Naples itself is a bustling city with some cool old castles. The riding in the city itself is balls really but that is typical of many cities. The food is great though and napolese peeps really rate their cuisine amougnst the best in the country. For lunch we ran a deep fried pizza (yes this is a thing) and then we met up with Mariateresa who had agreed weeks ago to host
us through Warm Showers. Dinner was a home cooked affair at her place and my personal favourite was her Puttanesca pasta 😋.

A great evening with Mariateresa and her friends. 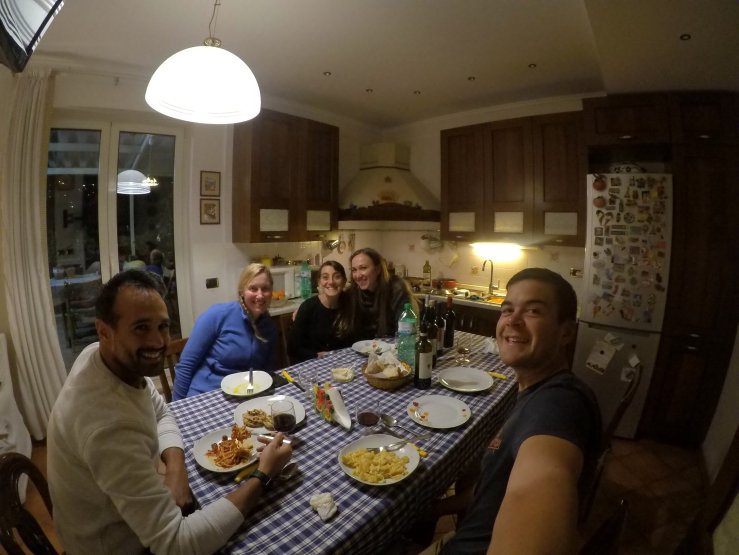 B: I woke up and walked Emm to the train station where we parted ways for hopefully the last time of this trip 🤞. She caught a flight to Logroño Spain to walk the Camino. Having a rest day in Naples I went to summit Mt Vesuvius but didn’t quite make the top as the road was closed due to a recent landslide 🙁. After I decided to check out the ruins in Pompei (the town destroyed after the 79AD eruption of Vesuvius). The ruins were pretty cool and the riding effort more importantly gave me a chance to sample the local Frola desert 😋. Went back to Mariateresa afterward and after dinner had the absolute best ice cream I have ever eaten in my whole life at Themis place called Fantasia! So many chunks of nuts in amoung some delicious ice cream 🤤. 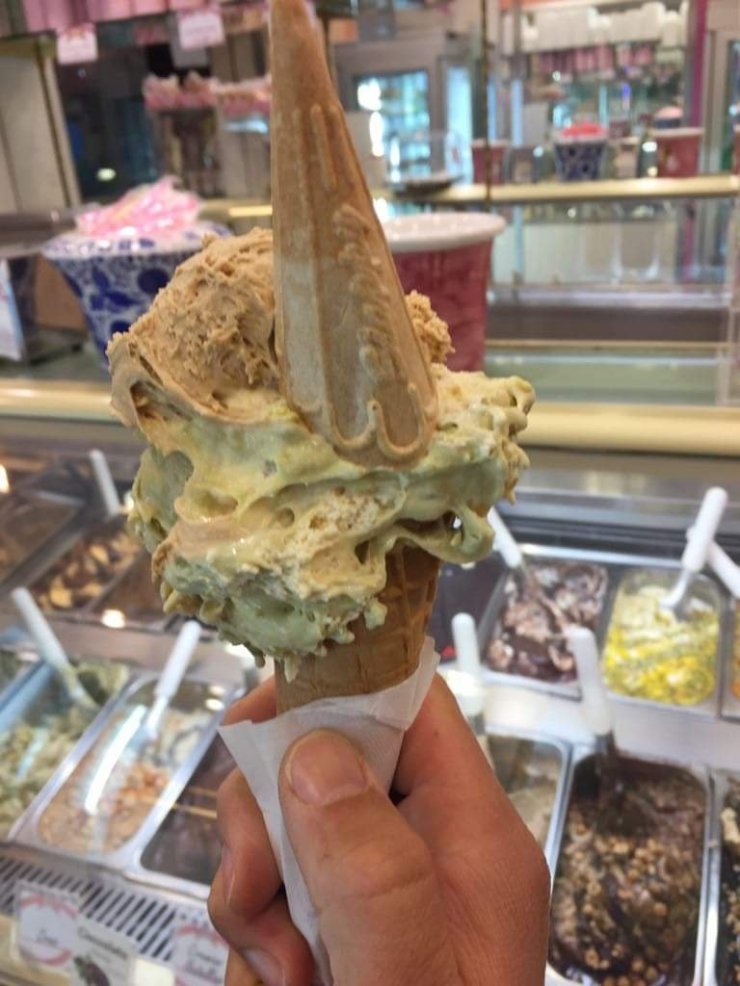 B: Mariateresa towed me 30km out of Naples towards Rome where we parted ways (thank you!!). 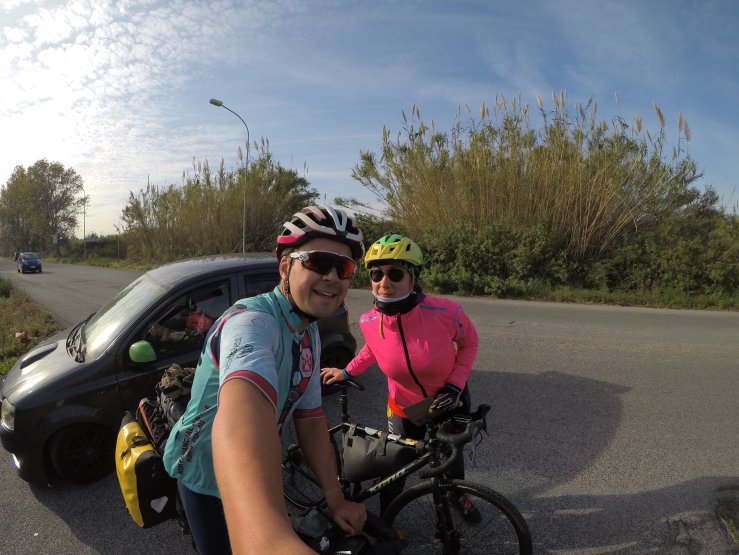 I then rode along the coast and stopped at Formia where I inhaled a local pizza before cruising to Alessandro and Elysa’s place in the heart of town. I had contacted these guys last minute through Warm Showers and they had graciously accepted my request. The prospect of cold rain overnight was not a fond one so I was even more stocked to have a roof over my head. We went out to dinner with some of their friends (very lefty political group) before having a lemonisca digestive prior to calling it a night.

Beau does dinner in Formia VIDEO

B: Elysa unbeknownst to me had woken up early to get some pastry breaky typical of the Naples region. We had Riche, Frola and Buba treats and washed this calorie bomb down with some good ole Italian coffee. It was a real pleasure for me meeting both Alessandro and Elysa who are down to earth really just good human beings. I set off at around 9am as I had a big day ahead getting to Rome. I was warned against riding into Rome due to mad Italian drivers and a lack of quality infrastructure. Hence, I mostly followed the coast North and was surprised to arrive at Lido Di Ostia at 3.45pm! I had clocked over 150km at an average of around 26km/hr 😳 (something I had not seen since the Denmark days of our trip). From here I caught the regional train into Rome costing €1.50 and met up with Brent from Warm Showers. On the way to Brent’s I rode past the colossal colosseum and had to sit down for a few minutes to take it all in. I always wanted to visit the colosseum and seeing it exceeded my expectations! Very humbling experience.

Brent is an American working for the UN in climate change who is as bicycle perverted as me 😂. It was funny seeing his bicycle setups as they closely mirrored my own and we found ourselves fast friends! We went out for a beer at a Irish pub (Guinness of course) and then had a curry for dinner. All up was a great way to cap off the big day.

B: big day of walking and taking in the magnificent city that is Rome. The one thing I want noted is how at every corner you turn you seem to stumble on some amazingly beautiful cathedral which would be the epicentre of any other city in the world but it is just ‘another cathedral’ in Rome. Despite being off season it is still rammed in Rome but coming here has definitely been a highlight of my trip so far. Cooked pasta shuto (thanks Maura again this recipe is a winner) and spent the evening chilling with Brent. 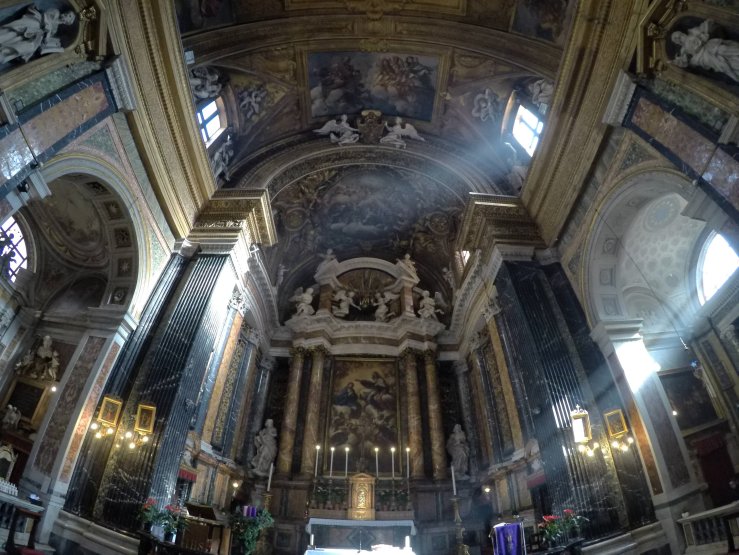 B: woke up had a big breaky then rode 85km to Civitavecchia where I caught the 2215 ferry to Barcelona. Not much to report on apart from it being my bday (31 today…time does seem to fly) and having a nice ol pizza to celebrate prior to departing on the ferry. Looking forward to getting to Spain and catching Emm 😊. 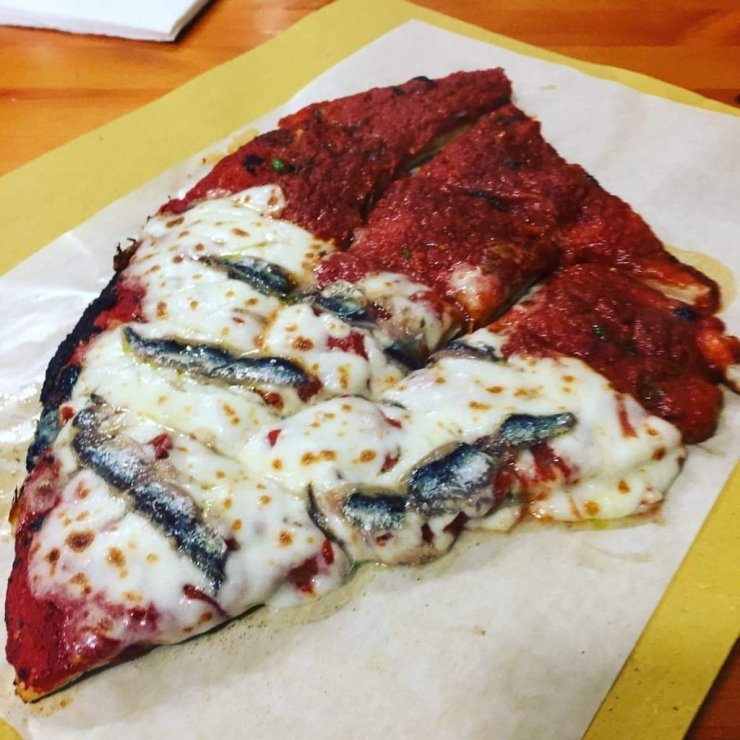 Day 1 and 2: I spent 2 days in Barcelona being hosted by Aina from Warm Showers. Based on her recommendation I rode the city to check out the Gaudi inspired architecture sprinkled around the city. I honestly only found the semilla familia church pretty impressive but didn’t like the new construction parts of it which seemed to ‘kid a candy land inspired design’ – but I’m no architect so who am I to criticise. 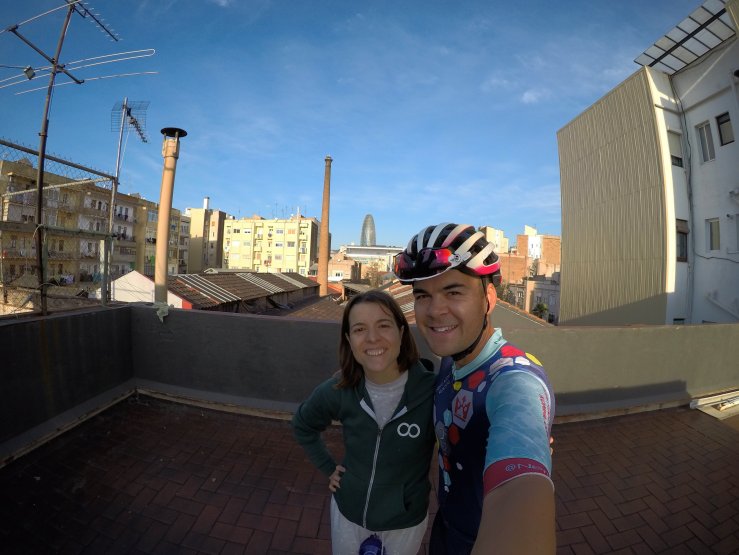 Day 3-7: rode from Barcelona to Logrono. Had some terrible days with direct headwinds where I was crawling along at 15km/hr max on pan flat roads but the banger scenery will definitely eat what stays with me in years to come. Very mid west America and I know understand why all the spaghetti westerns were filmed in this region of the country. Have to thanks both hosts Joan and Imanol who hosted me along
the way. 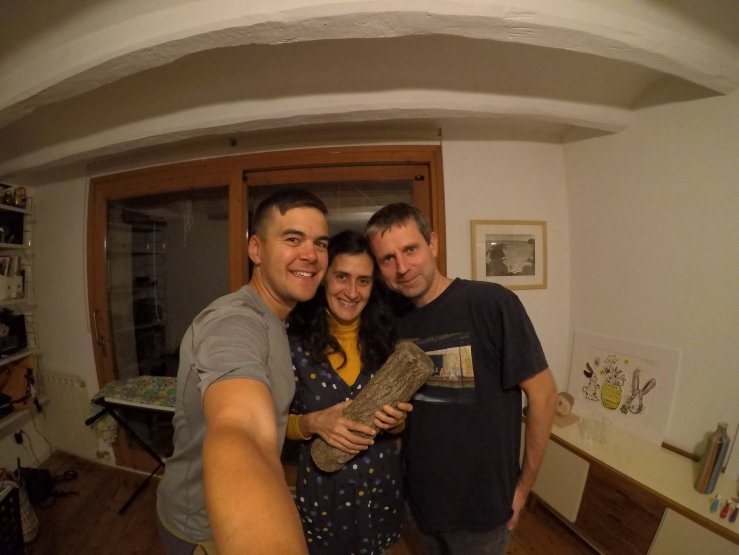 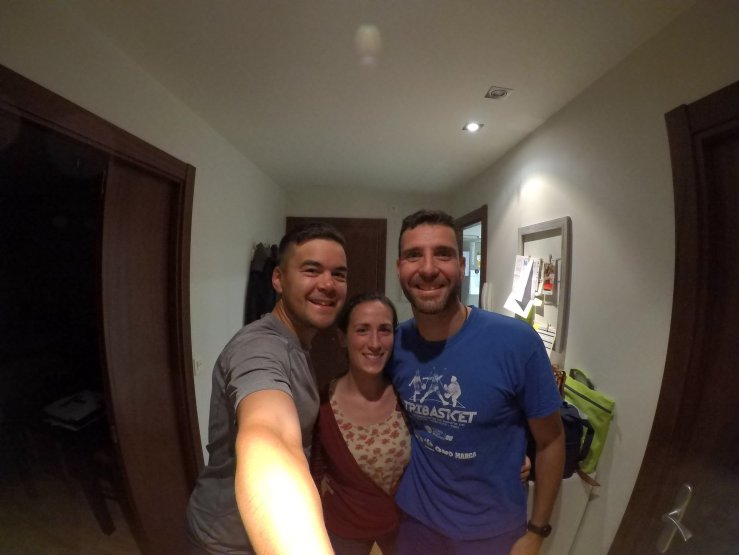 Day 8-19: starting the Camino riding from Logroño to Emm (somewhere outside of Leon). The Albergue in Granon was a absolute highlight which Emm recommended to me. As a group all the pilgrims and the host made gnocchi by hand and shared a evening reflection mass on things we were grateful for. I was fortunate to have a diverse and great group and had a great night.

Did a massive ride of 185km (biggest of trip so far) to allow me to catch up to Emm quicker! 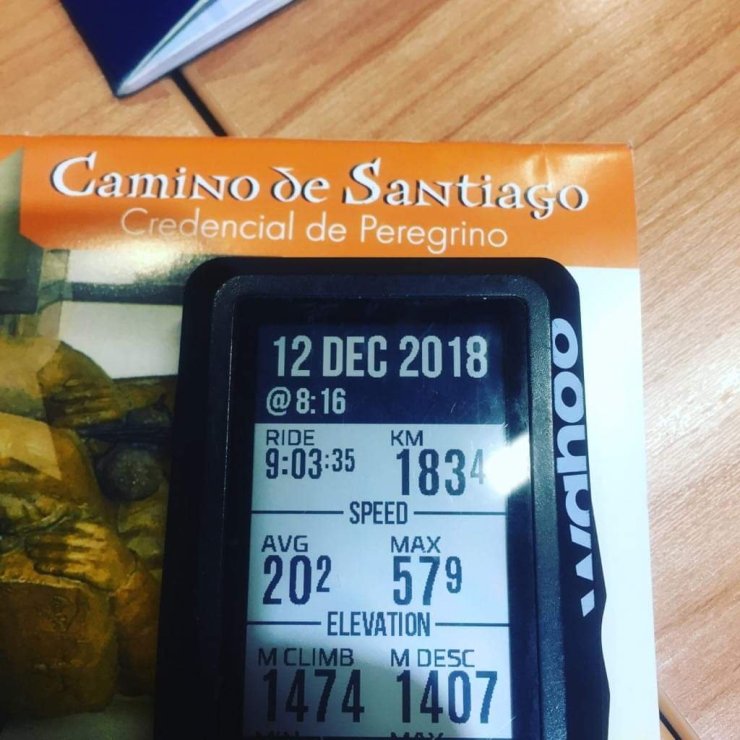 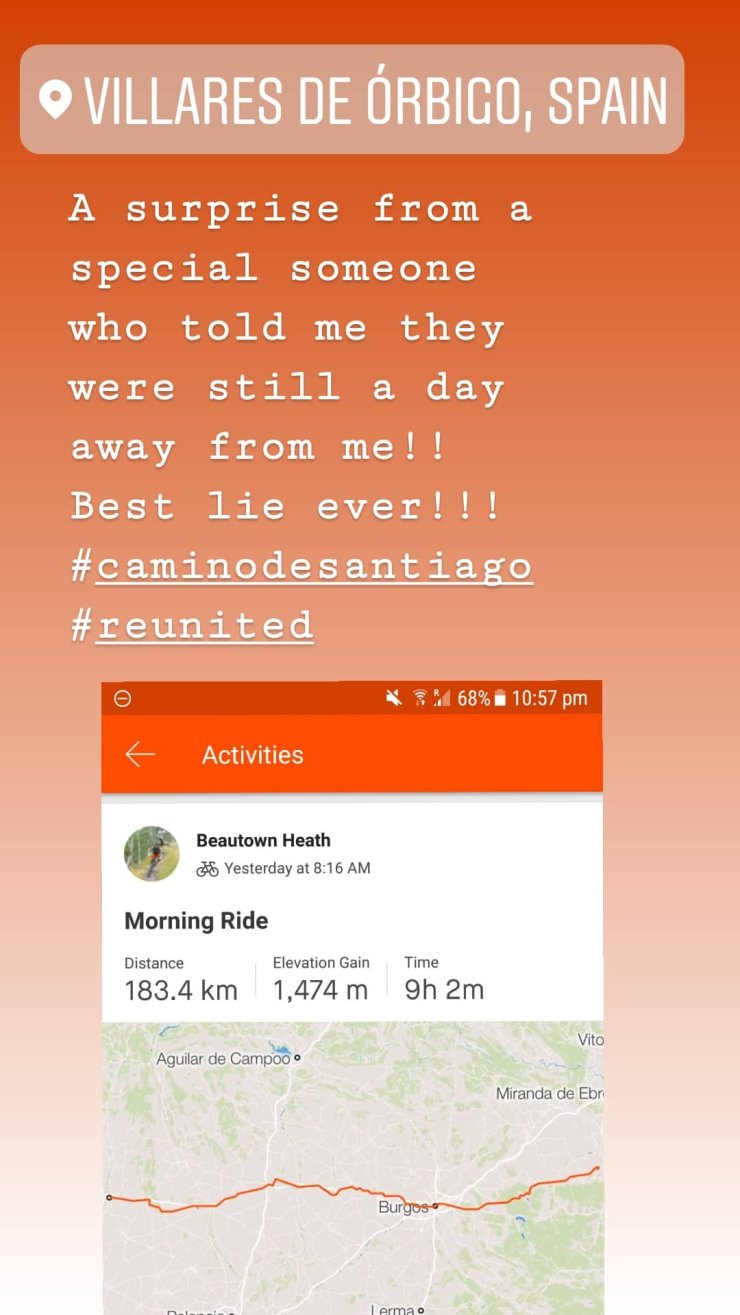 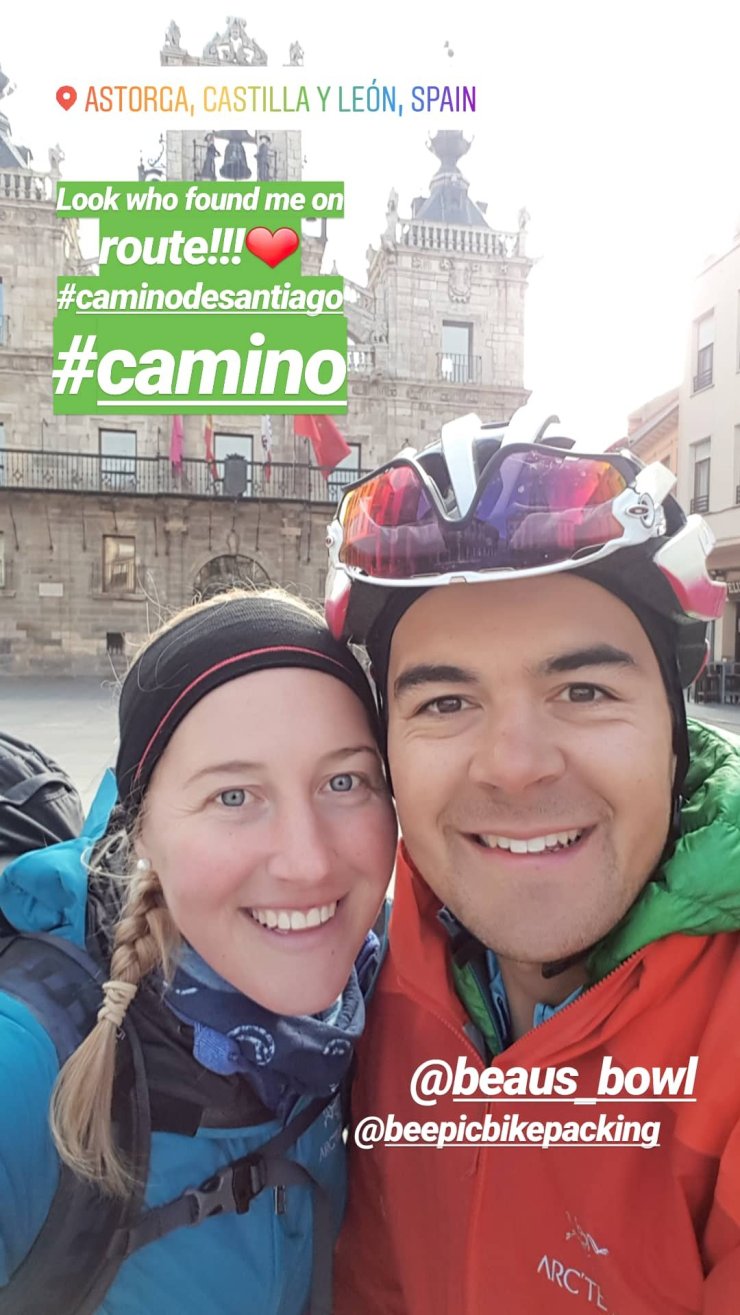 Spent a few nights with emm, Norman-eccentric Canadian, Michael-Irish and Dirk-Dutch doc (plus the other pilgrims who were on a similar schedule. Really had a blast with the crew and was stoked for Emm to have found a good bunch of people to walk it out with.

Rode ahead to Porto in Portugal to ditch the bike. Had some horrific days with rain/snow but made it. Have to thank both Miguel and Aires fromthe Warm Showers community for hosting me along the way and storing my bicycle!! 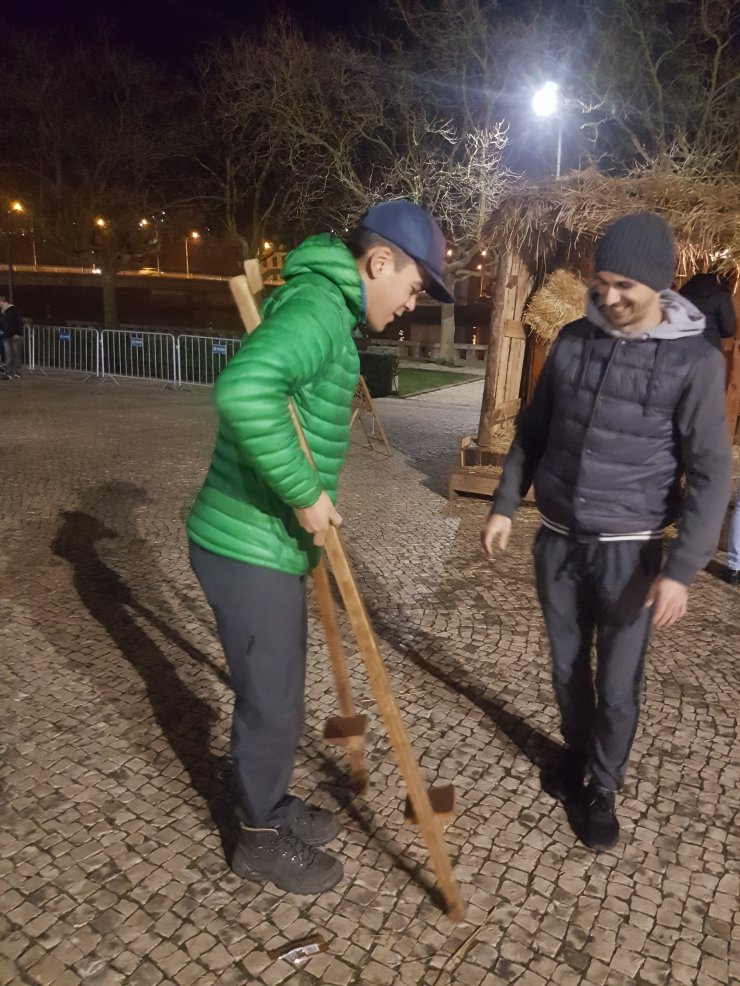 Made way back to Emm by bus and completed the last few days of Camino with her and the crew. Her diary for the Camino takes over from this point…

#TheCasualtyList…Items worth counting on this epic…

Jam jar count: 14 (2 jars from berries we picked ourselves)